I’m a writer and photographer. I’m working on my autobiography. Funny thing, but if people learn this they will often ask “is it finished yet?” Umm, unless you’re using a spirit board to ask that, the answer is obviously “No”. I’ve stopped it at the point I received my new birth certificate with new name and gender, but I’m still here so it could continue.

I write speculative fiction, also called science fiction and mystery and these pieces usually start with asking myself “what if …?”, then answering that question. That “what if …” could be on any topic – as the title indicates “whatever strikes my fancy”. I’ve destroyed cities and other planets (usually with classical music playing in the background as I write) and in the late nineties I chronicled a war that destroyed this planet. What prompted that was the debate over whether the 21st century would start January 1, 2000 or 2001. I think the answer depends if you ask an historian or a mathematician.

With my blogs, again I write about any topic that strikes my fancy or irritates me. I enjoy writing about various online scams as warnings to my readers. For the most part I stay away from American politics. I’m not American so unless what’s-his-name in the White House had done or said something exceedingly stupid, I ignore it. Having said that, living in Canada and being reasonably intelligent, I am aware that events in the U S may and can have a tremendous effect on us as well, so I do pay attention to American politics. I have however taken Canadian federal politicians to task on many occasions over their pronouncements or actions. And with the current regime in Queen’s Park, I can see that Ontario Premier Doug Ford will become a frequent target.

I prefer to write and edit in longhand, then once I’m satisfied I transcribe to the computer. By doing so, if inspiration strikes while I’m out I can capture the thought at the moment as I usually carry paper and pen.

I use this same approach with my photography. If something catches my eye, I’ll take a photo. A flower, a sign, interesting architecture, a scenic vista or sometihng whimsical such as this shot below taken outside a local shop on my phone, it doesn’t matter. There are occasion , such as grocery shopping, when carrying a camera is too awkward, by my phone has an excellent camera. 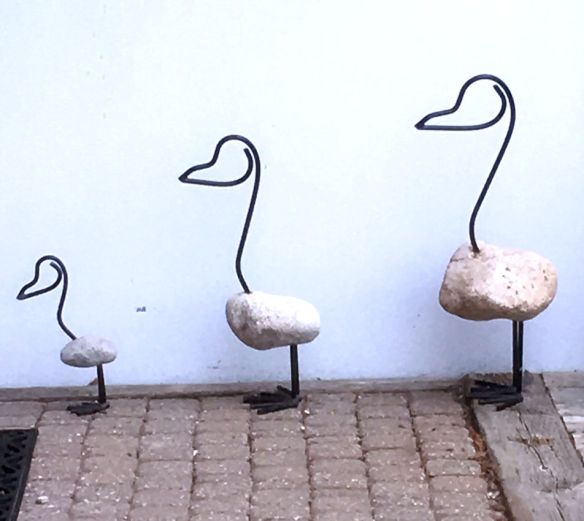 I use digital cameras (Canon ever since my first film SLR in the seventies) and have what I consider to be good software – Corel Paintshop Pro for processing. I can usually find something in the raw image to turn into a photo. And of course, by using digital cameras and processing, “undo” and “delete” have become my best friends.

I’ve had various people who like my work suggest to me I should give courses in both writing and photography. Such course would be very short indeed for here’s what I’d say:

Writing: write about what interests you. If that requires research, great – you’ll learn something new. If writing fiction or topical blogs, write the way you speak. If people who know you read it, they’ll hear your voice speaking the words and for others, it will sound more natural. Don’t use what I call “ten dollar words” in an attempt to sound more intelligent. If you don’t normally use them in everyday vocabulary, you’ll probably use them incorrectly.

Photography: if it catches your eye, snap it and sort it out later. Remember, “delete” can be a powerful tool.

There’s the essence of any courses I’d give.

Now, go create something and remember to hug an artist, no matter what their field of endeavour, for we need love too. And to my Canadian followers and visitors, have a safe and happy Canada Day weekend.

This site uses Akismet to reduce spam. Learn how your comment data is processed.