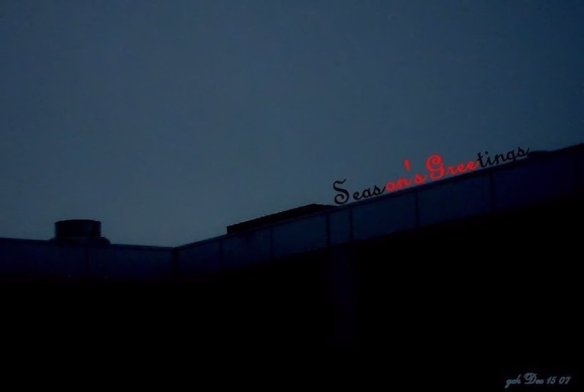 I don’t know where the orgfinal blog went, probably somewhere on a back up disk, but there is a little story behind the photo on this posting   About 20 years ago, there was a building, the Metro East Trade Centre, in Pickering that had a huge “Season’s Greetings” sign on it every December.  This sign was apparently controlled by four separate circuits because, depending upon who was working which night, it would either read “Seas tings” or “on’s Gree”, usually the latter, and “on’s Gree” became a family joke. The building is long gone, but when I got into digital photography, I decided to see if I could duplicate that sign.  I realize the font isn’t quite right, but this was the results of my efforts.

So, to all my friends, I wish a hearty “on’s Gree”

Remember to hug an artist- we need love too.

This site uses Akismet to reduce spam. Learn how your comment data is processed.